Showing posts with the label Interview
Show All 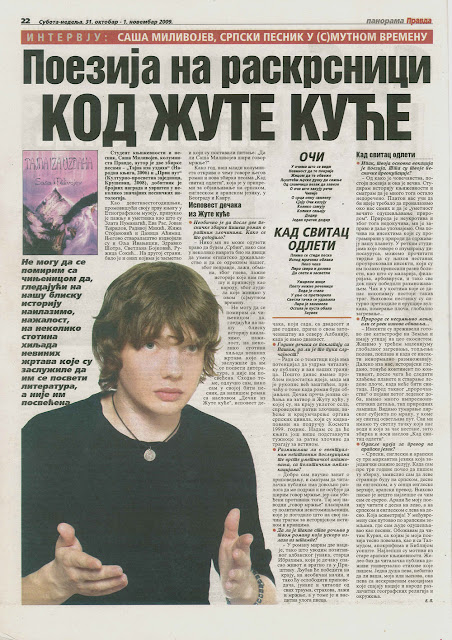 Saša Milivojev, interview, Pravda Newspapers SAŠA MILIVOJEV HORRIFIC ORGAN HARVESTING LAIR DESCRIBED BY AN EYEWITNESS THE VOICE OF RUSSIA 2 9. October 2012.  15:24 Moscow time INTERVIEW “Live people were wrapped in barbed wire and thrown downhill”, – this is perhaps one of the “nicest” memories of the main character of The Boy from the Yellow House , a journalistic novel written by the Serbian writer Saša Milivojev. The author collected in one work just a tiny fragment of the atrocious crimes carried out by the Albanian terrorists in Kosovo before and after the NATO’s aggression against Yugoslavia. The main character, a 12-year-old Serbian boy who was kidnapped in broad daylight and who almost fell victim to an illegal organ transplant in the notorious “Yellow House” in Northern Albania, where no less than 300 people, primarily Serbs, were killed. Many reputable sources claim that the victim’s organs were sold abroad, from which profited the leaders of the terrorist Kosovo Liberation A
Post a Comment
Read more
More posts